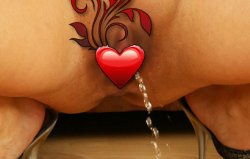 It was my second day as a college freshman and I was already overwhelmed. Meeting new people, being on a large campus, and keeping up with my class schedule was making my life hectic. I needed a release, but ordinary vanilla sex just wasn’t going to cut it. I needed something much more satisfying.

My chemistry teacher Mr. Kirkpatrick was the spice I had been looking for. He was tall, dark, and handsome with a patch of grey hair just like I liked my victims. His brown eyes pierced into my soul as he read every naughty thought that came to my mind. The first time we met he showed me special attention and whispered to me his desires of student teen pissing. I never thought about them before, but I knew if I granted his wish then I could do completely nothing in his class and still pass with flying colors.

I went over to his place one evening dressed in my dollish lingerie and pink patent pumps. Before I could even knock on his door he opened it and greeted me with a seductive grin. I licked my lips and stepped inside of his luxurious penthouse. Everything looked expensive and taken care of.

“Would you like something to drink to get things going?” he asked me.

I nodded yes as he disappeared into the kitchen. Waiting for him to return, I sat down on his couch as my eyes wandered. When he returned with my beverage, I quickly gulped it down and exhaled.

“Are you ready?” he asked as he offered me his hand.

He led me into his bedroom where all the magic took place. I began unsnapping my bra and taking off my panties as he stripped naked. I left my heels on and watched him as he laid on the bed getting ready for what was to come.

He helped me get on top of him as our eyes locked looking deeper into one another. I mounted him as if I was ready to ride his cock but in reality, I was preparing myself to give him the golden shower of his life.

He closed his eyes and smiled as I stood over him on the bed. “Are you ready for my hot piss you old bastard?” I asked him.

His body quivered as the first trickles of piss left my pussy and hit his skin. I giggled a little as his eyes went all over the place amazed at how good my golden pee felt.

“Goddess please give me more. Your golden piss feels like heaven on my skin” he stated.

I let out a wicked laugh as I let my pee flow all over. By the time I was done, my pee filled up the entire bed and had his body smelling like my scent. My student teen pissing was amazing and made me feel completely in control.

“Ooooh, baby that feels amazing. I want to worship every drop of your pee” my teacher said.

“Mmmmm you’ll be worshiping every ounce of me for the rest of your days,” I said as I hovered over him.