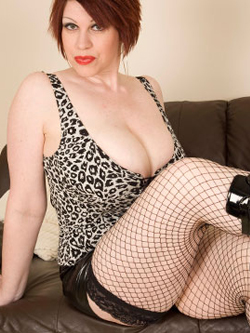 I’ve always been the type of woman to crave more than one cock to fulfil my needs. Sensual domination has always made my blood boil, so when I got married I knew no matter what it would be hard not to fall into temptation. When my husband got a higher position at the firm, I knew my nights would be free to do as I pleased so when a new guy came sniffing around I decided to take full advantage of the situation.

My husband’s boss Richard was my new victim. He showed me his weak side early on so I knew how to take full advantage of him. One day my husband called me and said he had to work late to finish up a big project and wouldn’t be home until the wee hours of the morning. I grinned as I told my honey that I understood he had a big job to do and not to worry. Tonight would be the night I finally got my hands on Richard.

I heard a soft knock on the door while I was lacing up my leather thigh high boots. Walking to the door, I exhaled before I opened it.

As I opened up the doors to my secret room, I eyed him up and down as I grinned thinking about tonight’s festivities.  My secret room was my private space where I was able to fulfil all of my domination fantasies. Every whip, chain, and pair of handcuffs was specially ordered to my liking and was sure to put any man in his place. As we got closer to my special chair, I looked Richard in his eyes and said “Your addiction starts now,” as I sat on my throne and opened my legs exposing my honey pot.

His eyes grew big as my pussy became moist, rubbing it right in front of him being the ultimate tease. He began whimpering as my lust filled eyes began to close while I continued to dip my fingers inside of me. I pulled my breasts out of my red and black corset so he could see my puffy nipples as he looked up at me. I pulled him closer to me and had him show me his tongue before I allowed him access to my wet centre. His tongue sucked on my clit and went in and out me as I moaned out in pleasure.

After two minutes of allowing him into my forbidden spot, I pushed his tongue out of me. “Beg to taste me,” I said as I bit down on my bottom lip.

Without warning, I grabbed the leather whip that was on the side of me and reached over him, firmly spanking his bottom before he could even open up his mouth to plead. His head fell down as a sadistic laugh escaped my mouth.

With those words, I allowed him back in me and continued our sensual domination session. My husband called several times, but I was too busy getting my pussy licked to even bother picking up the phone. Finally, I was able to quench my sexual thirst and dominate the man I’ve been wanting for months.

Want to hear more about my kinky sexcapades? I’ve had many more filthy sessions with my husbands’ boss. Text me now so you can hear all about them.