7.Two Condoms Are Better Than One

False. You might think ‘double bagging’ will keep you twice as safe from infection and/or the risk of pregnancy, but you’re actually increasing your chances. Wearing two condoms causes more friction and makes it more likely that the condom will tear, the same applies to using a condom and a diaphragm during the same session. When condoms do fail 9 it’s usually down to human error, ie not using the condom correctly and/or not using the condom for all of the sexual activity.

False. Foods considered to be aphrodisiacs, you know the classics – oysters, strawberries, some weird wheatgrass/Spanish fly concoction are believed to heighten our libido and our sexual senses (sight, smell, taste and touch). But in actual fact NO food or herbal supplement has ever been scientifically proven to stimulate our sexual organs! The governing bodies that be even go as far to say that herbal aphrodisiac supplements can be really freaking BAD for you! So save you money boys, if she’s not floating your boat, sucking on an oyster isn’t gonna help you out.

False. It’s been a long standing joke for many that as soon as you get that ring on your finger and the honeymoon period is over that you can kiss goodbye to the impromptu blow jobs, lazy morning sex and all night spunk marathons. And they tell you it will only get worse with age, the older you get the more decrepid your sex life will become.But in actual fact if you check out this handy chart from the Kinsey Institute you’ll see for yourself that the married and the old are seeing more action than anyone else! 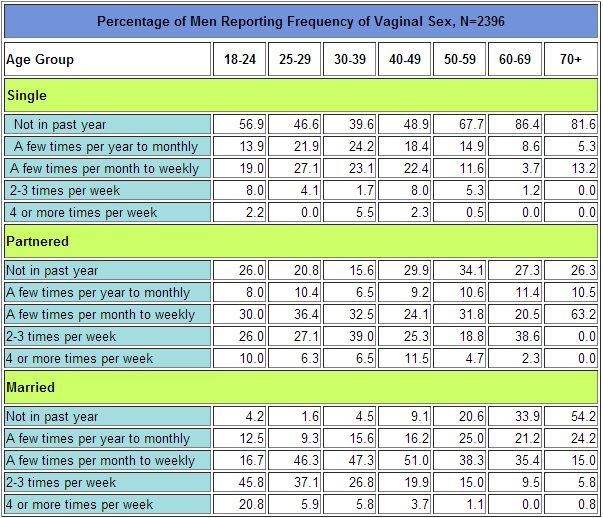 False. Now I’m not saying rush straight out and shag the fit cousin you’ve always had a semi for! I’m just saying if you did and happened to produce offspring then they wouldn’t necessarily be born with genetic defects as the myth would have you believe. If you don’t believe me, take Darwin’s word for it, that dude was all over Evolution and he himself married his FIRST cousin. Having a child with your cousin raises the chance of birth defects by 2-3% which is the same chances as 41 year old woman having a baby. So scientifically speaking banging your cousin is no weirder than a 41 year old having a baby! Except ya know…it’s kinda gross…

False. You’ve heard of the ban on WAGS before a big England game and it’s not always just because of the unwanted media attention. It’s common in a lot of sports for coaches and managers to put a dampener on any upcoming cum fests and enforce a cock block. They believe sex will tire you out and use up valuable testosterone. In actual fact an energetic mattress mambo will only use the same amount of calories as running up a couple of flights of stairs and if you can’t manage that you’re no athlete! As for testosterone, tests show that sex actual INCREASES testosterone levels, making a man even more competitive. So there you go, got a Sunday League game coming up? Get ya nuts lads!

FALSE. A recent French study has found physical evidence of the elusive sweet spot. Whether this area of thicker tissue between the vagina and the uretha is a magic orgasm inducing button all depends on the sensitivity of the woman, but have no doubts, it’s there!(see also Is the G-Spot Real?) Hit this spot and trust me, with in 10 seconds you’ll know about it! That’s all the scientific evidence you should need.

1.The Withdrawal Method is Completely Unreliable

False. We’ve all done it (right?!), ‘It’s ok (I’ll)just pull out…’ and we all know it’s not a reliable form of contraception, but is it as unreliable as we’ve been led to believe. There’s no question that the withdrawal method offers you no defence against sexually transmitted diseases so you should always suit your little soldier up before having sex with a new/random partner until you both know you’re sexually healthy. What you perhaps didn’t know is that while condoms are 98% effective in preventing pregnancy, the withdrawal method is 96% effective! So if you do happen to be caught riding bare back one evening, a little self control will go a long way fellas!