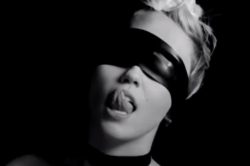 The media was yesterday flooded with stories that Miley had submitted her three-minute fetish-themed short film, “Tongue Tied,”.

“Miley was proud to make a film with acclaimed filmmaker Quentin Jones. She did not instigate this festival submission and is not participating in any way,” the pop star’s spokesperson told the Post.

Although Leahy immediately took down the submission, he blamed the production company for not checking out the Festival, and the media for the uber hype.

“Obviously the story went totally viral that freaked everyone out,” Leahy added. “We don’t want to cause any harm to Miley and her image.”