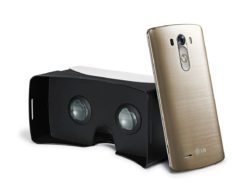 Yesterday, LG announced that it will give away Google Cardboard-inspired 3D headsets for free to customers who purchase new LG G3 smartphones.

The headsets are designed to mount to the smartphone, giving users access to virtual reality compatible apps and games on their Android operating system.

“While still in its infancy, this is just the beginning of the virtual reality movement, which until recently was expensive and inaccessible to everyday consumers,” said Chris Yie, vice president and head of marketing communications for LG, in a statement.

“By leveraging Google Cardboard, not only are regular consumers able to participate in the VR experience, we’ll be able to introduce this technology to future developers who may one day show us how VR can be used to improve our lives.”

The “VR for G3” follows the last VR deployment on a sizeable scale of Samsung’s Gear VR, released last year, which uses the Samsung Galaxy Note 4 as the display and costs about £600.

Oculus Rift headsets, meanwhile, are slated to be available later this year. Its DK2 model will sell for about $350.

Microsoft too is getting into the VR game. The company last month said it’s working on a holographic headset called HoloLens, which is expected to run Windows 10 and apps.