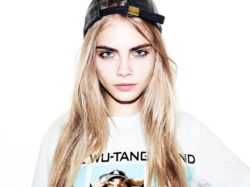 Cara Delevingne recently admitted she’s been caught having sex on planes – but she’s certainly not the first famous face to enjoy some mile high club action and certainly won’t be the last.

The cheeky actress, who is dating 33-year-old singer St Vincent, spilled the beans about her personal life in a very revealing interview with LOVE Magazine with Suicide Squad co-star Margot Robbie.

Talking about her risky sexual antics, the 23-year-old said: “I’ve had sex in planes a lot. But I’ve always been caught. It’s super-hard not to get caught.” Although she didn’t seem to bothered with other voyeur passengers.

“I had sex in the chair on the plane and there was a guy watching so we ended up telling the air stewardess what was happening. Like, ‘This guy keeps staring at us. Can you tell him to stop?’

Other celebs that have joined the mile high club include:

Kim Kardashian- Private planes only though because apparently she doesn’t fly with the general public.

John Travolta- Taking full advantage of his pilot’s license with his wife.

Liam Neesan- He said: “I joined the mile-high club many years ago. I remember it was on a Lufthansa flight.”

.Miranda Kerr- The ex-missus of Orlando Bloom told GQ magazine: “The older I get, the more confident I am about asking for things I enjoy.”. She however, did not speculate on which partner she got frisky in the sky with.

Reese Witherspoon and Jake Gyllenhaal- According to a witness on the same flight, it took only 11 minutes…

John Legend- Legend’s moment of Glory came with his wife Chrissy Teigen and we certainly see why they couldn’t keep it in their pants!

Barbra Streisand- The Way We Were singer Barbra. She hired a private jet to fly over Los Angeles so that she and her husband could become members.

Have you joined yet? Don’t let the celebrities have all the fun!